ORIGIN STORY:  Zombie-proof Fitness was started in July 2010, a month before the U.S. was hit by a hurricane and a rare earthquake. Those two unstoppable events were a perfect reminder of why this was needed. As I write this, tornados just hit seven states. When the zombie apocalypse comes, our fitness will face the ultimate test. Be fit or get bit.

So, the ZPF philosophy was there: work hard, work smart, build your own gear, find your own training space, and do stuff that will help you be physically ready when it all goes down, be it tornados or earthquakes or zombies.

But something was missing...

In early November, the feedback was clear: cool idea, good philosophy, but it needed a more specific program. So I holed up for almost four months, figuring out what would make it not just a great functional fitness program, but one that was also truly unique.

With the help of my sons, I found the answer in an unexpected place: video games. Most fitness programs just ask you to participate. Pay your money, show up, done. In games like Halo, Call of Duty, or World of Warcraft, you have to complete certain achievements in order to level up. Just putting in time doesn't cut it. You have to be able to actually do progressively more challenging stuff.

That was the breakthrough. To survive the zombie apocalypse, you have to be able to do useful and challenging stuff. Just going to the gym week after week won't save you from getting bit. Zombie-proof Fitness is about working hard, completing achievements, and leveling up. From there, it was just working out the details.​

I won a plank contest at an Army recruiting booth. It looked like a fun challenge, so I jumped in. I hadn't done any special prep other than my typical minimalist training. At age 49, I won with a time of 17 minutes + 30 pushups. At the very end, they had the final three people do max pushups until failure to determine the winner. 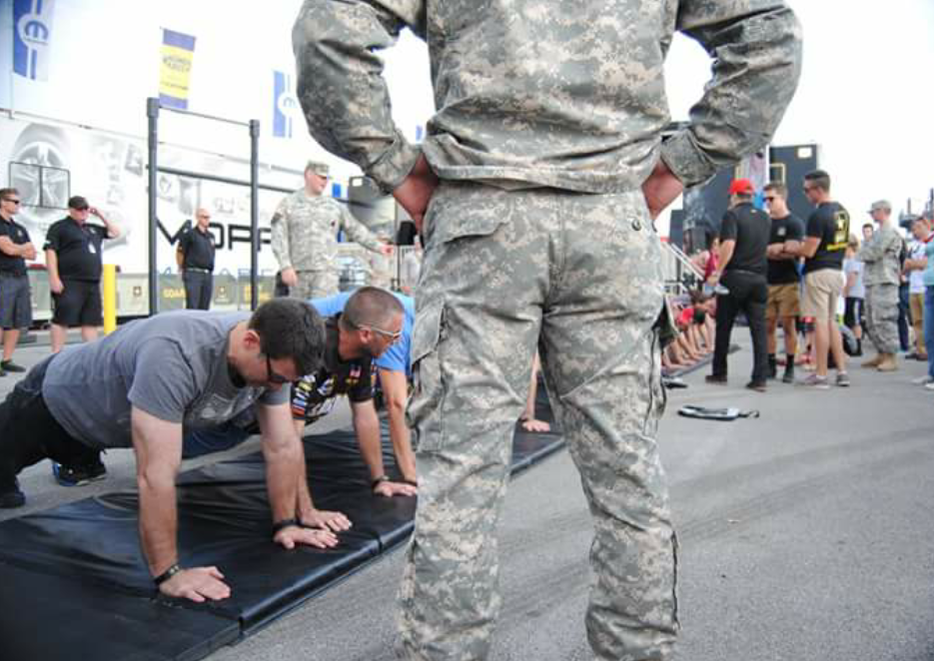 The training is wide-open, so use whatever methods you want. Bodyweight training, barbell, kettlebells, strongman, bodybuilding, Crossfit, or anything else in any combination. The important point is that whatever your training, you only get to level up in this program if you can achieve all seven movement requirements for that level.

The idea is that zombies don't care what you look like, how hard you worked your biceps yesterday, how sore your legs are, or what kind of post-workout shake you drink (I prefer chocolate malts). They only care if you are faster, stronger and more fit than the other people around you, because then you can save yourself. Get even faster, stronger and more fit, and then you can save others too.

Everyone starts at the bottom level. To be a Level 1: New Recruit, all you have to do is Commit To Not Get Bit. That puts you ahead of a lot of people who do nothing for their general fitness, and makes you more likely to survive.

​The top level is Level 5: Zombie-Proof, and is based on a lot of research I did on the balance between performance improvement, normal trainable capacity, safety risk, and diminishing returns. Beyond the Zombie-proof achievements, improvement is for specialists and carries higher injury risk. Not good for a survival program.

The seven movements were strongly influenced by the work of the great strength coach Dan John. He's the very smart, very kind, very funny guy who's the real origin of the popular goblet squat, the slosh pipe, the loaded carry, and the idea of "reasonable training". I've had the pleasure of hanging out with him for an evening (twice), and he's the real deal. I adapted the movements for a more post-apocalytic purpose, and took out the groundwork (rolls, crawls, falling, tumbling) because they are hard to test. IMPORTANT POINT: rolling, crawling, falling, and tumbling are a critical part of training that most are missing, especially as people get older. For example, Dan's get back ups. Or rolling.

The program is also heavily strength-biased. That's because stronger people live longer, are less prone to injury, and the recruitment of Type II fibers in challenging strength training promotes fat loss better than traditional cardio. It's the easiest path I've found to all other measures of fitness.

​I'm currently in my 50s, and have achieved Level 4: Horde Slayer. I'm working towards Zombie-proof. Want to join me?
The seven movements:
The five levels:

Five of the seven movements are scaled based on your bodyweight. Enter your weight in the upper left, and the spreadsheet will do the math for you.

For several years I ran a six-week preseason session for middle- and high-school players. The goals were to teach simple, effective movements so they would reduce injuries during the season.
click for moehr!