Origin story:  My mom asked me to read a book on the history of inuksuk, the striking Inuit stacks of rocks that are shaped like people and serve as directional markers. I learned that the name meant "that which acts in place of a human being", and I woke up the next day with this story in my head.

A few quotes that served as additional inspiration...

"For centuries, the Inuit people of Canada’s Arctic stacked rock in human form to create the Inuksuk, a steadfast guidepost that provided direction across the vast horizons of the North."

"It reminds us of our need to belong to something greater than ourselves..."

"When you look at an old Inuksuk, you are seeing more than just a stack of stones. You are seeing the thoughts of another person left upon the land.” - Norman Hallendy
Sunset on Inuksuk Ridge
by Scott Moehring

The path was getting steeper. Tuktut breathed a little harder in the cold air, and pressed on and up. She had found the hidden path marked by the tall Inuksuk. It was a fantastic human figure of stacked rocks covered in fuzzy lichens and light snow. She marvelled at how expressive it was, both pointing and beckoning. Something deep within had compelled her to follow the faint depression that went into the trees and up the hill.

During the long climb, her vision was obscured by the thick woods all around. At times she could barely make out the way ahead. As she finally got to the top, she took a few more steps and arrived at a rocky ridge. The trees fell away and she could suddenly see for miles in every direction. The low snow-covered valley below, the curving icy river, the gentle hills, the distant mountains – it took her breath away. She stopped, breathing heavily and transfixed by the sight.

There was a large flat rock a few feet off the path. She stepped onto it and sat down on a small boulder to rest. A cold breeze whispered through the pines and refreshed her. She sat for a long time, just breathing and looking. The vast distance she could see echoed the weight of time she felt in the surrounding rocks.

She wished she could share the feeling of this special secret place. It was so beautiful and peaceful that she found herself saying aloud “I just want to stay here forever”.

A sudden gust of wind blew up and circled around her. She watched snowflakes caught up in the spinning air. It seemed unusual, but entrancing. It then faded away as suddenly as it had come.

The sun was getting low in the sky. Her legs felt heavy and stiff from sitting on the cold stone, but she knew she had better get started on her long climb down. She stood up and took one last longing look at the landscape, thinking “I wish I didn’t have to leave”.

She went to take a step towards the path, but her foot didn’t move. She chuckled to herself, “I’ve been here so long my boot is probably frozen to the ground”. She pulled at her other foot, but it didn’t move either. She pulled harder, and her curiosity became a sudden panic that gripped her as tightly as the flat rock. Her feet weren’t moving at all, and now she could feel her ankles locking up. She twisted and pulled for several long minutes, but nothing would break them free.

As she looked wildly around her, the setting sun flashed an intense orange and caught her eye. Tired from her struggles and distracted by the brilliant light, she unexpectedly exhaled a sigh at the beauty of it all. As she momentarily relaxed, she felt the stiffening move a few inches higher up her body. The fear returned, but it was somehow less intense. It was tempered with a new emotion, faint and difficult to name.

Her legs felt like stone, but she was being overwhelmed with a strange and deepening connection with the hill beneath her. She became aware that she could finally name the feeling that was growing and pushing out her fear. It was a deep peace and sense of purpose, that of old witness trees and ancient mountains. She pictured her body as a careful stack of rocks, preserved for eons as a marker to others of that perfect spot from which to view the world around.

Tuktut focused her gaze on the last light of the sun before her, exhaled in acceptance, and was stone. 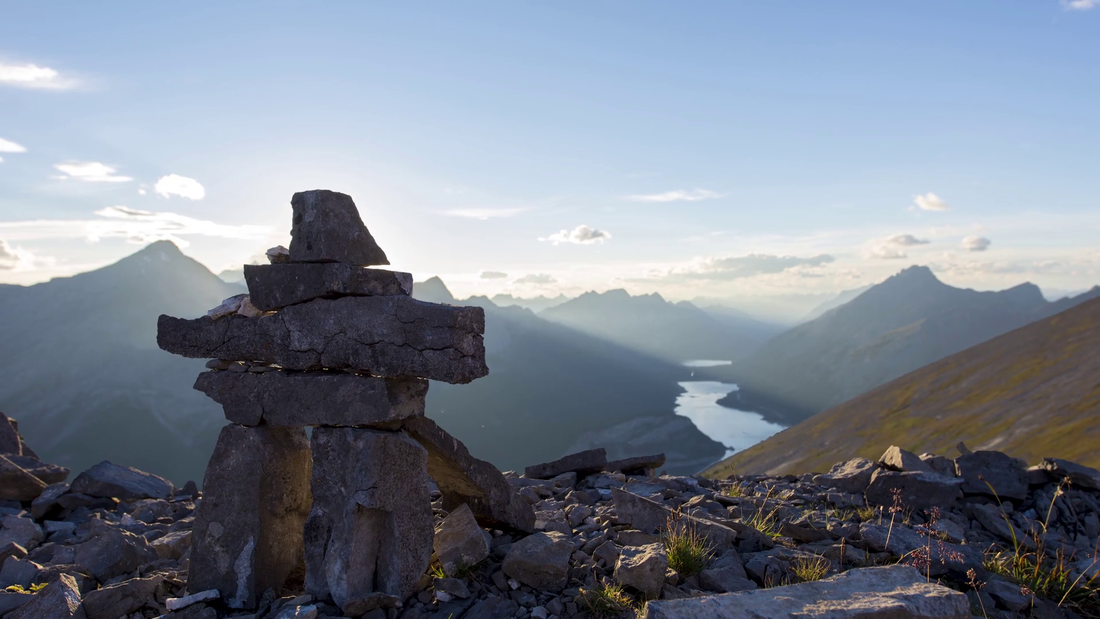