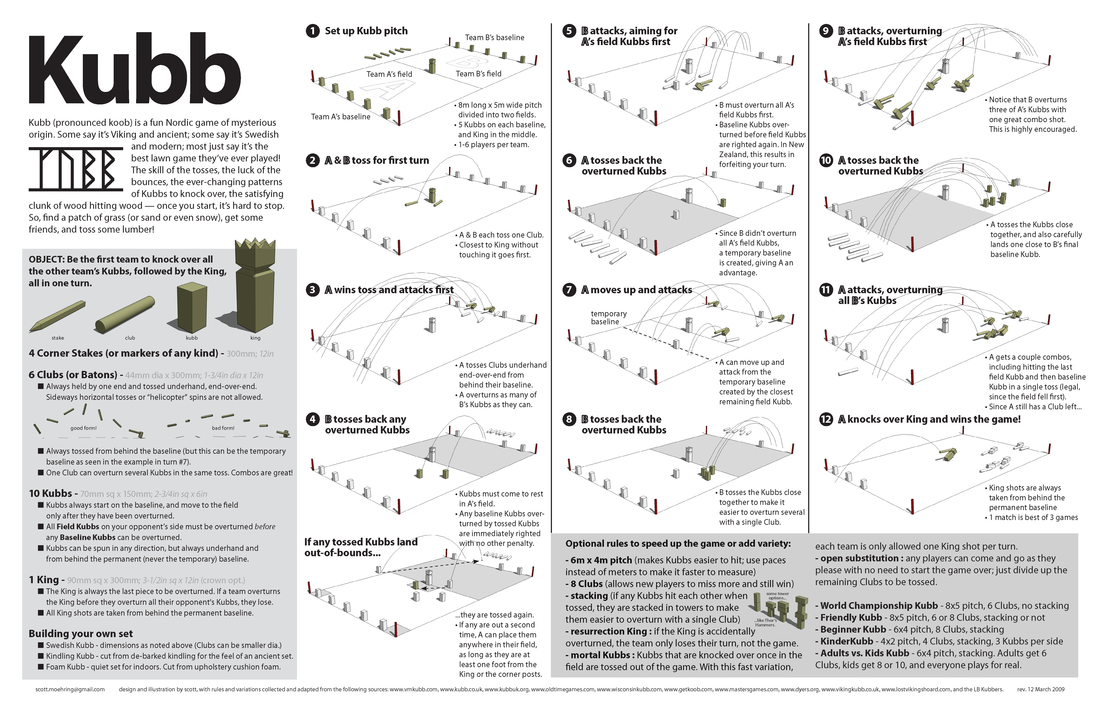 Origin story:  My son Andrew and I were walking around a local Irish festival, and we found a small Viking exhibit. They were playing this intriguing game with tossed sticks. There was a big crowd sitting on the grass watching. We hung out, played a couple games, and loved it. Soon after, we made a couple sets. Everywhere we played, people would ask about it. I wanted to spread the word, so I made a one-page visual rules and kept several copies in the bag to give away. We still think it's the best lawn game ever.
I created this one-page Kubb visual rules to explain my favorite lawn game to curious passers-by, and for years it was distributed at the US Kubb Nationals to help new people understand what they are watching. Over the years my son and I have taught hundreds of people how to play. I've never found a better outdoor game. I've made sets out of finished lumber, found kindling, upholstery foam, and corrugated cardboard. I even cut a set out of PVC pipe in the back of my hatchback in the rain because I had a couple hours and a bored group of hockey players.
Click below for a pdf of your own 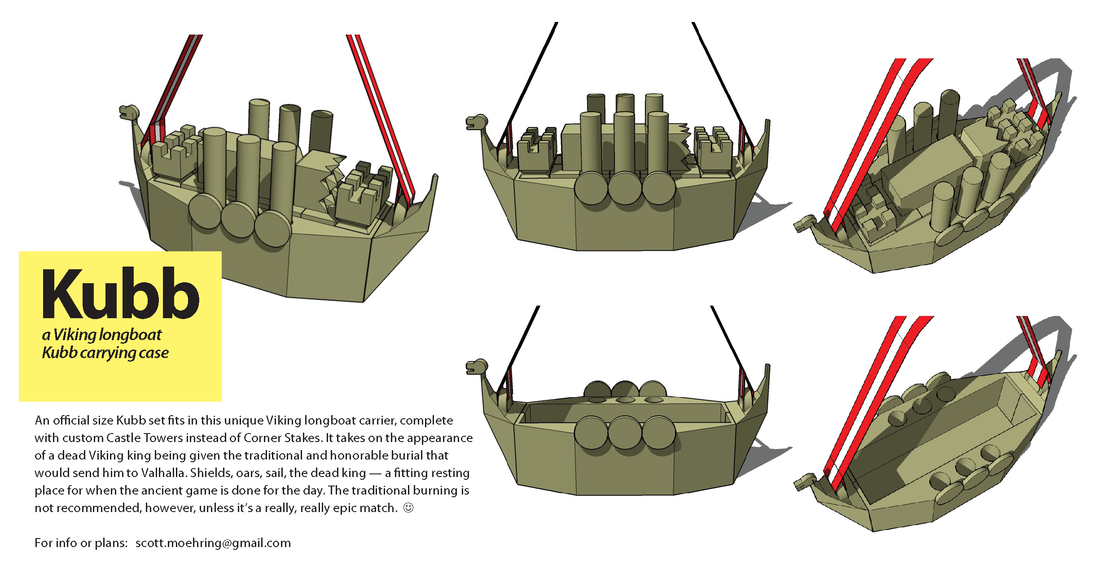 After a couple years I had an idea to make an epic carrying case shaped like a Viking longboat. ​I put a little 3D drawing I had made on the bonus second page of the rules pdf. I optimistically thought I would be able to provide plans (if anyone even asked).

Oops. I starting getting emails literally from around the world asking for plans to build my Viking longboat Kubb carrying case. I get one almost every week. That's been frustrating for both me and them, mostly because I have never actually built one! Eight years and hundreds of requests later, I still haven't figured it out.

A few years ago, my friend Bruce tried to help me with a wooden version. We met with a woodworker. No help. Then we tried on our own. We only got this far before it stalled. The angles are tricky. The weight is way too heavy. It just wasn't working. 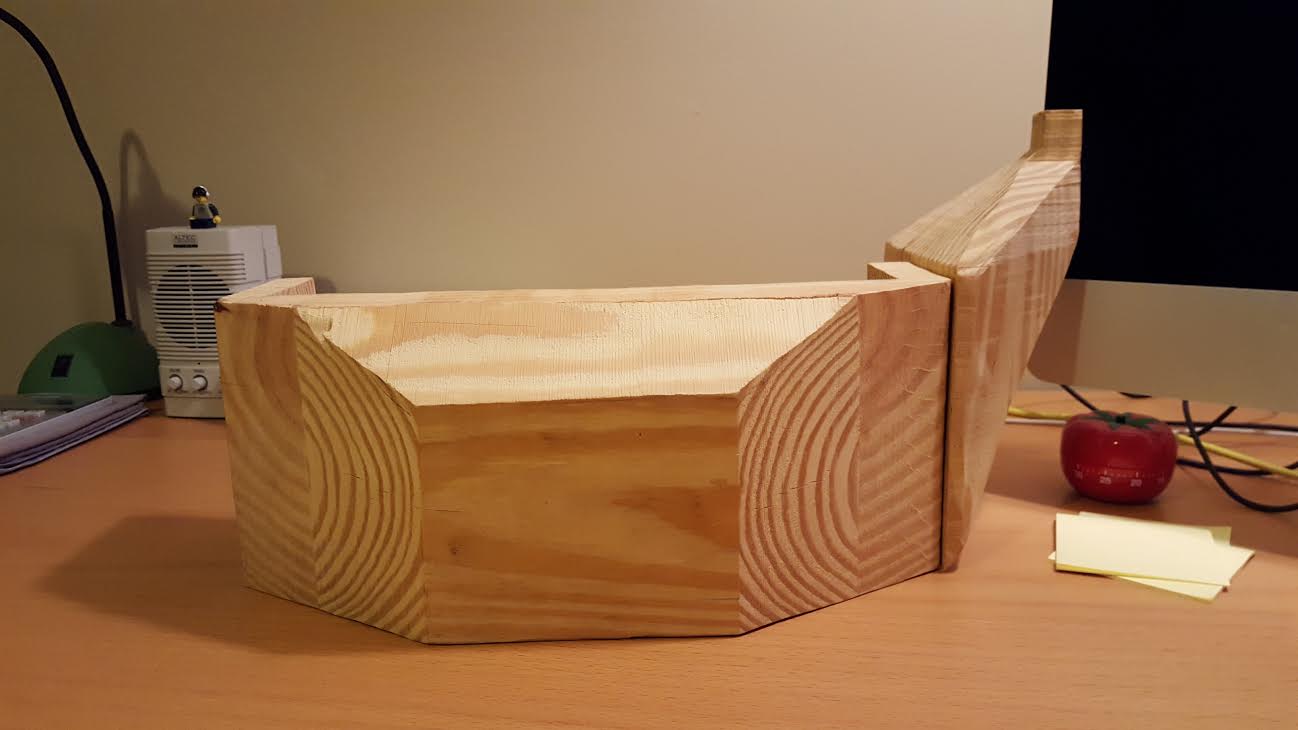 I wasn't sure it would ever get off the drawing board. More time went by, and I was talking about it at my mom's 80th birthday party. My brother had the idea to make it out of corrugated cardboard. I grabbed a piece of paper and some scissors, and mocked it up. It actually looked possible, and I was excited again!

I've spent maybe 20 hours on it since then, including building one base, scrapping it, and starting over. The pieces look fine and play great, even indoors! The base has potential, but there is still some significant work to be done. 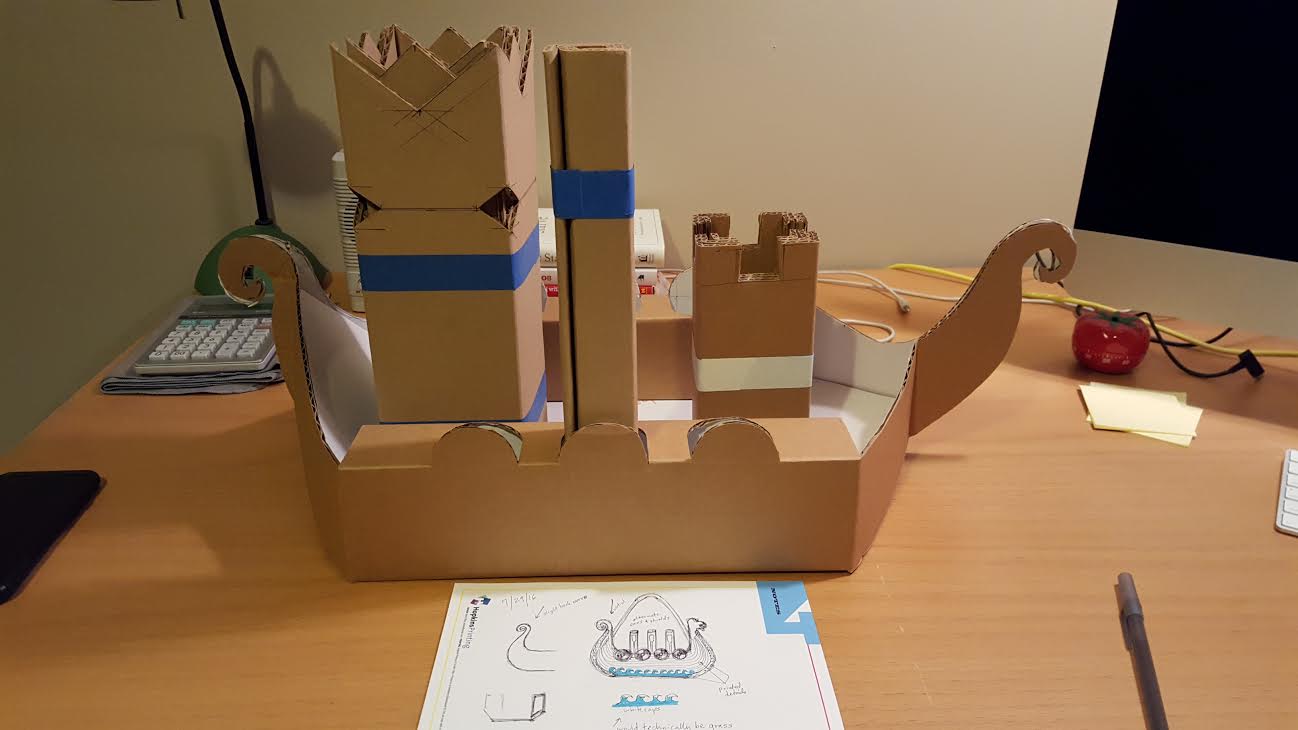 My new goal for this

My goal? To create a cardboard Kubb set with longboat carrying case that could sell for under $30.

​I would hope by lowering the price threshold of buying a beginner Kubb set, it would enable this awesome lawn game to get into the hands of lots more people. Families heading to the beach for the day, or looking for a group backyard game for a party, or campers looking for a game to bring along (that could even be burned when done). It even opens up the option to play Kubb indoors without damaging any floors.

Of course, this set isn't designed for years of use. I would expect anyone who really got hooked to pony up for a quality wood Kubb set, but this might be the thing to get them started for cheap.