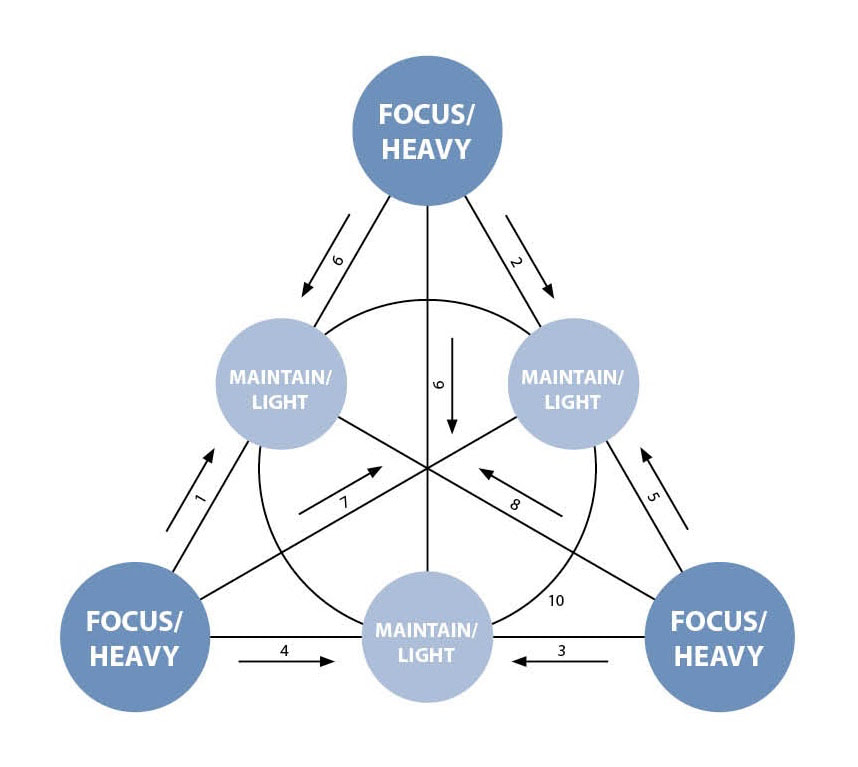 Origin story:  Dan John is one of the Great Teachers. He's a strength coach, multiple record holder, Fulbright Scholar, and all-around fantastic human being. If you've ever done a kettlebell goblet squat, or carried a slosh pipe, or done a round of "get back ups", you have him to thank.

I had the rare pleasure of spending an evening with him at a discus camp (no, I don't throw). Over the course of a couple hours with him and two of his talented student coaches, I presented the Fano Plane as a possibility for a visual model that tied together his thoughts on his six fundamental movements - push, pull, hinge, squat, carry, and groundwork - and we worked out the details.

No model will ever be all-encompassing or perfect, but for simple, effective and balanced exercise programming, this one is still pretty good and useful. ​Will it work for you? As Dan often says, "it depends!"

In his many books, videos, and blog posts, Dan John has long discussed his training concept of the Six Fundamental Movements - ​push, pull, hinge, squat, carry, and groundwork.

In July 2015 I was fortunate to be welcomed into an evening of strength training conversation with Dan and two of his student coaches (Kelton Mehls and Chase Kallas). It was during an annual discus camp held down the street at Denison University. When Dan mentioned he was looking for a visual model to help explain this concept, it occurred to me that a Fano Plane has six points, and it might be interesting to map the movements to the points and see what happens. 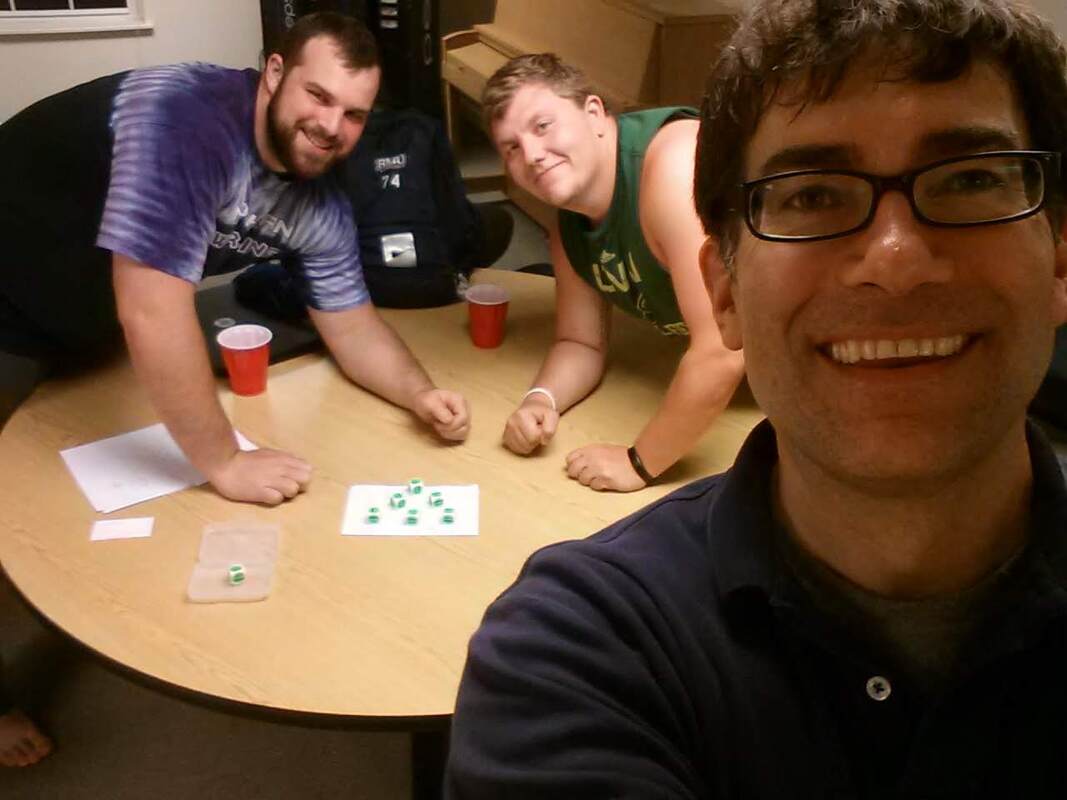 This is what we made. You cut out and place the six movement pieces on the six points of the diagram. The corner points indicate a Focus movement (harder effort), and the edges are a movement to Maintain (easy-to-medium effort). You then use the arrows to move around the plane in different ways. ​
There are two main methods we worked out: 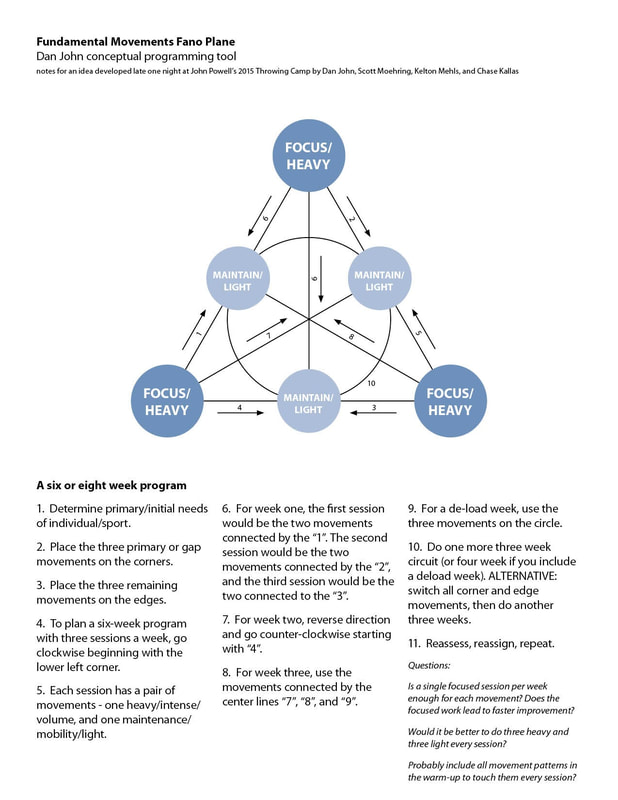 Dan had also come up with the idea of grouping the movements into three categories. Survive (groundwork and climbing), Thrive (hinge, loaded carries), and Sex Drive (push, pull, squat). Dan explains it in a short video here. Or in more depth in writing here.

This second method of using the Fundamental Movements Fano Plane splits the plane into two configurations. The first focuses on Survive and Thrive (sprint, carry, and climb movements), and the second focuses on Sex Drive (muscle growth and hormone cascade). The Survive and Thrive version is good for in-season athletes, when the demands of their sport are high, and training needs to be reduced to conserve resources for sports performance. The Sex Drive version is good for off-season armor-building.

For athletes, this could be programmed as five workouts a week. Three heavy sessions of three Focus movements, alternating with two light sessions of three Maintain movements. For example, in the off-season Sex Drive version, it would be three workouts of heavy Pushes, Pulls, and Squats, alternating with two workouts of light Carries, Hinges, and Groundwork. 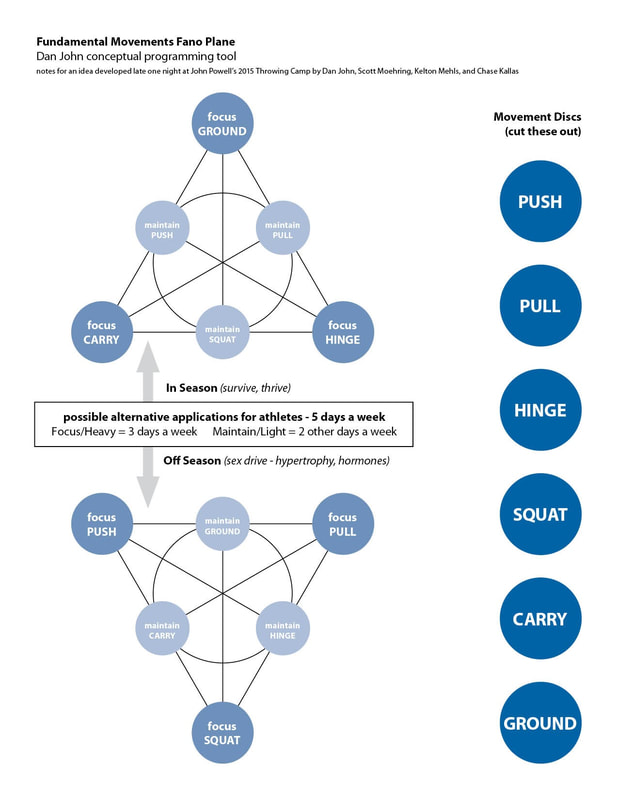 I also made a set of random workout dice using the fundamental movements.
CLICK TO SEE WORKOUT DICE!